Blood in the Physical Body 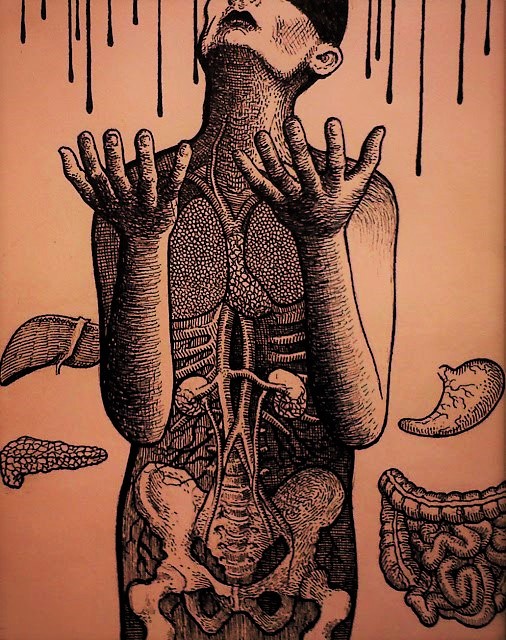 Blood is responsible for many processes to ensure that our muscles, organs, and brain continue to function. Most creatures use blood in some form or another as a way to move oxygen and other nutrients around through different organ systems.

Our bodies have been able to evolve so many complex systems that rely on circulation. Our muscles would be quite useless without blood, a heart, and lungs. The systems of digestion, respiration, and circulation all needed to evolve before becoming the basis of modern vertebrates.

One of the most primordial examples to look at for a clue as to where our precious red fluid came from is the earthworm. Worms have hearts and blood, but no lungs. Instead of lungs, they use the surface of their skin which absorbs oxygen from the air, where it meets oxygen-depleted blood pumped out from the core of the worm’s body to the surface. The carbon dioxide is expelled through the skin, replaced with oxygen, and fed back into the worm’s muscle system.

Even this is more complicated than what must have been the simplest creatures. We can assume that at one point, there were smaller unicellular organisms than worms, without hearts. Blood would have been a fluid in which all organs were suspended and took oxygen from the outside and distributed it by diffusion. From this model, a heart would have evolved to more efficiently distribute oxygen, which allowed for the evolution of much larger creatures with much more sophisticated systems of moving this red life force throughout the body.

In humans, blood serves many purposes. The first and most obvious purpose is the distribution of oxygen throughout the system. Oxygen is used to break down sugars, which is how muscles get their energy. Therefore, each muscle and organ needs a constant supply of oxygen to continue this process. The vital red liquid fills this role by being transported to and from the lungs to the rest of the body and back.

Fresh with oxygen, it arrives at organs, drops off the oxygen and leaves with carbon dioxide, the waste product associated with processing sugars. When this blood bearing carbon dioxide returns to the lungs, the carbon dioxide is deposited and exhaled, and fresh oxygen that is inhaled suffuses the red cells. Then, the oxygenated cells is ready to go back into the body.

In addition to dropping off oxygen and carrying off carbon dioxide, there are many other nutrients that are distributed. For almost any nutrient that needs to be taken anywhere in the body, the route it takes to get there is dark and red. It is responsible for carrying amino acids and fatty acids, which are used in constructing new tissues or repairing damaged ones. It also transports glucose, which is the sugar that muscles burn for energy.

Just as blood carries carbon dioxide away, it also is responsible for removing many other waste products. Urea, which is filtered out by the kidneys to become urine, is one such waste product. Another is lactic acid, which is another byproduct of muscles working. The ache in your muscles after strenuous activity is the result of the accumulation of lactic acid.

In addition to carrying raw materials and fuel and removing waste, your blood is also responsible for distributing messages through the body. While many signals from the brain are sent directly through the nervous system as electrical impulses, many others are instead sent by hormones.

Hormones are chemical keys that tell certain body parts to respond in specific ways. For example, hormones are transmitted from the digestive system to the brain to signal a hunger response. Hormones are also sent from the brain to the rest of the body to signal changes like puberty. Any hormone sent for any reason rides through the vessels to get there.

White blood cells serve as a defense system against infection and disease. These disease-fighting cells patrol the bloodstream looking for anything that has a chemical marker that designates it as something that doesn’t belong in the body, and they work to absorb and expel it as waste. In this way, only the most severe infections become enough to make us sick.